From the Summer 2010 Edition of PsittaScene Magazine. Get a free subscription with your WPT membership. 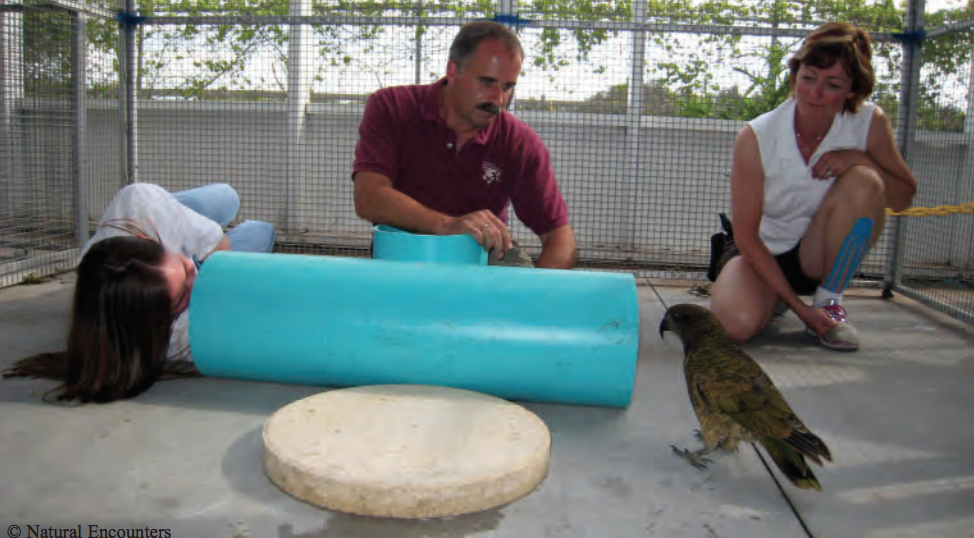 This Kea is first reinforced for approaching a new item (plastic tube) in his enclosure. Through successive approximations with reinforcement for each stage, he is taught to enter and walk through the tube in just a few training sessions

These principles are relevant to working with all species of animals. Understanding each principle and arranging the environment to reflect them affords animals the best possible chance of achieving behavioral health and sustaining lifelong relationships with their caregivers.

Power to control one’s own outcomes is essential to behavioral health. Behavior is a tool, an evolved mechanism that enables animals to change their environment in some way that has personal value. Research suggests that controlling outcomes is also associated with emotional well-being, even with human babies as young as three months old. Animals from dozens of species have demonstrated the contrafreeloading phenomenon: they choose working to get valued outcomes over freeloading (i.e., response-contingent reinforcement over non-contingent reinforcement). Therefore, one way to empower animals is by designing more complex environments rich with choices, problems to solve, and purposeful activities that run the gamut from species-typical behaviors (e.g., foraging) to novel behaviors (e.g., dunking basketballs).

The power to say no is perhaps the most overlooked provision in the lives of companion animals. It is the freedom to use behavior to escape events perceived as aversive to the individual. Blocking an animal’s escape responses works against its nature to behave for an effect.

If response blocking persists, animals can learn that their behavior is ineffective. This leads to learned helplessness, depression, learning disabilities, emotional problems and even suppressed immune activity.

We can empower companion animals to say no by ensuring that they have an escape route, a runway, to move away from imposing hands, and unfamiliar people and items, whenever possible. For instance, a 6” long T-perch used for training restricts a parrot’s escape but a 36” long perch (with the caregiver at one end of the perch) allows the animal to express its choice to move away. This strategy may seem counterproductive to caregivers who hope to have close relationships with their pets; however, the apparent relationship that results from forced interaction is only an illusion. True relationships are the result of choice and a preponderance of mutually reinforcing interactions – not force. The goal is for animals to choose to approach their caregivers, which can be achieved by following these teaching principles.

More from the World Parrot Trust 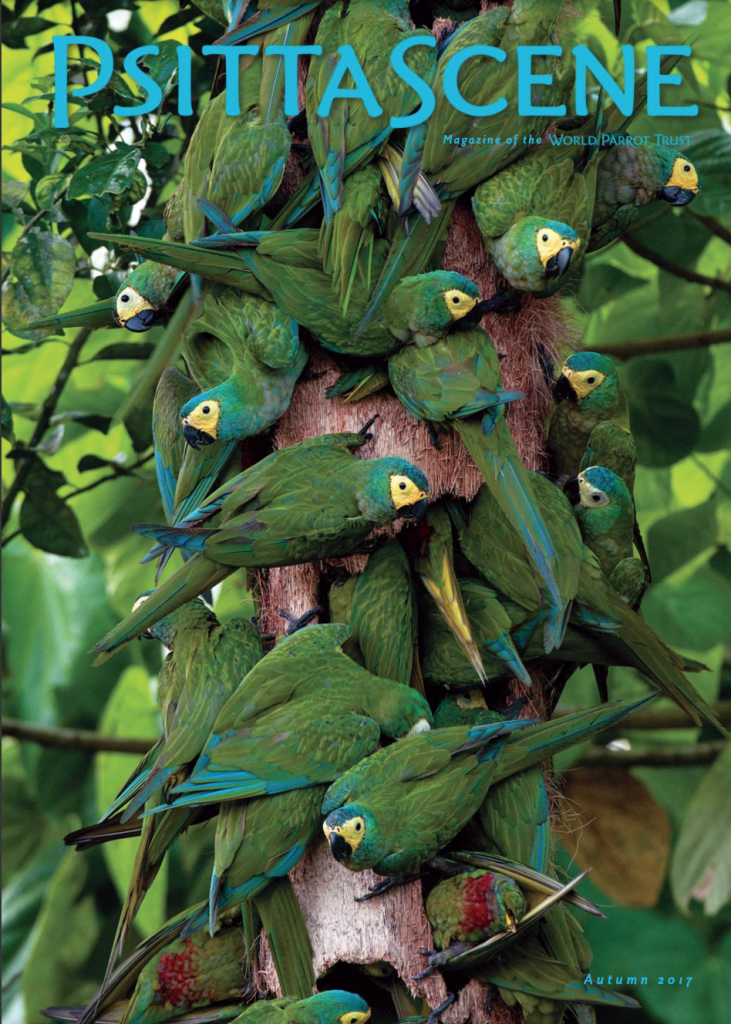 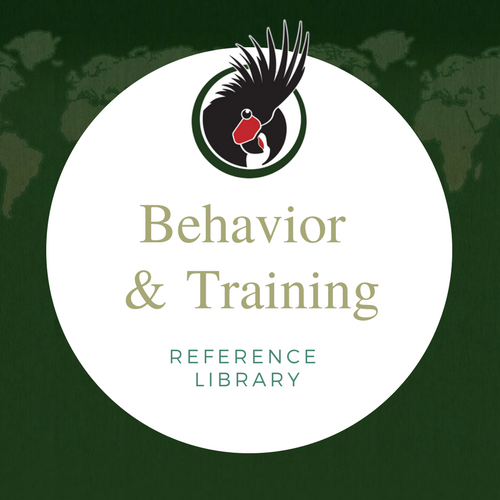 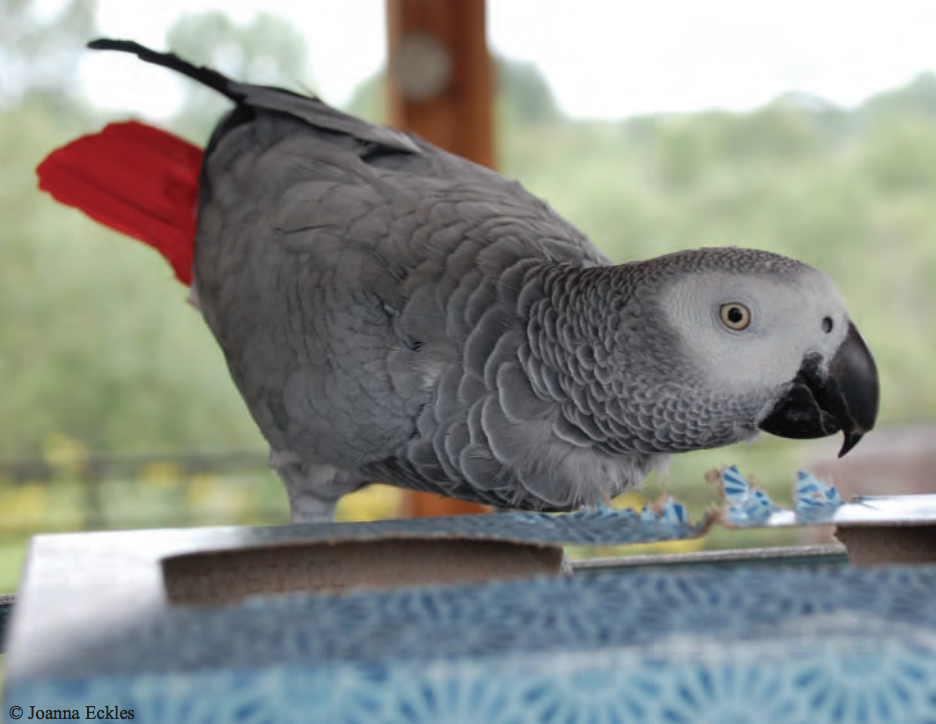 This African Grey Parrot much prefers to destroy a tissue box for hidden treats rather than to take the treats for “free” from a dish – a phenomenon called contrafreeloading.

The key to teaching new behaviors is reinforcing approximations toward the end goal. People often expect animals to instantaneously perform complete behaviors. For example, many caregivers expect a parrot to perform the complete “step up” behavior just because they (or anyone else for that matter) offer a hand. When animals don’t meet this expectation, caregivers too often resort to coercion, such as cornering the bird to make it step up. Coercion can result in big withdrawals from the trust account, which may not be easily recouped.

Animals tend to learn better when they are reinforced for smaller, approximate responses that ultimately lead to the end goal. This procedure is called differential reinforcement of successive approximations, also known as shaping. It is the sharpest tool in any teacher’s toolkit. To illustrate, the complete step up behavior for a parrot can be broken into the following approximations: 

Shaping requires sharp observers with excellent mechanical skills to notice the small variation in responding that can lead to the final behavior and to catch that approximation with timely reinforcement. If the learner (or the teacher) experiences difficulty advancing from one approximation to the next, it is best to go back to the last successful approximation rather than withhold reinforcement to the point of eliciting frustration in the animal. The most effective ways to create the momentum needed to steadily advance through the approximations is to reinforce smaller approximations, avoid staying on one too long (which reduces variability in responding over the repetitions), use stronger reinforcers, and communicate a clearer response criterion by precisely timed and consistently delivered reinforcement.

Reinforcing consequences are essential feedback about how to behave in the future. Positive reinforcement is not manipulation, and reinforcers are not bribes. Positive reinforcement is the natural process by which behavior is maintained or increased by consequences. Learning is the process of behavior change due to experience. This inherent flexibility to learn is surely one of the animal kingdom’s most astounding survival mechanisms.

A related strategy is to withhold the reinforcer that maintains a problem behavior (extinction) and to deliver super-sized reinforcers (positive reinforcement) for an appropriate alternative behavior.

This two-fold strategy is called differential reinforcement of alternative behaviors (DRA). A DRA schedule is generally more effective and less intrusive than extinction alone or punishment. With a DRI schedule, where the targeted alternative behavior is incompatible with the problem behavior, changes can be accomplished even more quickly (e.g., a parrot can’t stand tall and lunge at the same time).

A high rate of repetition across different conditions builds fluent, generalized behavior. The term behavioral fluency describes quick, accurate performance of a behavior. Fluent behaviors are emitted without hesitation in the presence of appropriate cues or conditions. Generalization is the extent to which a behavior occurs in different settings or situations (i.e., stimulus generalization). When it comes to good citizenship behaviors – behaviors that keep animals in their homes – the goal is fluent, generalized behaviors. Positive practice is the means to achieve this goal. Positive practice refers to high rate of repetition that results in a high rate of reinforcement.

It’s easy to underestimate how much positive practice is needed to build a fluent behavior in one setting and to generalize that behavior across different settings and situations. When an animal doesn’t respond to a cue or request, people often feel frustrated and insist, “He knows this behavior. I’ve seen him do it a dozen times!”

Effective teachers define what an animal knows by observing what it does, and they interpret an animal’s failure to respond to a request as an indication that more positive practice is needed.

It may take hundreds of reinforced repetitions, in several different settings for an animal to reliably respond to a cue. Research indicates that learning generally proceeds more successfully when practice is distributed over many short sessions rather than less frequent, long sessions.

Therefore, positive practice doesn’t need to be very time consuming. A few quick repetitions a day can build and maintain behavioral fluency. One positive side effect of this approach is the strong bond that develops between the teacher and learner due to the high rate of reinforcement associated with positive practice.

For an objective understanding of behavior, focus on describing observable behavior and observable conditions. Most caregivers never consider how their descriptions of behavior are really just value labels of what they think an animal is rather than what it does. They wish for a companion animal that is friendly, is docile, or is sweet. However, we can’t really teach animals what to be; rather we teach them what to do, given certain conditions. For example, we can train an animal to approach people, relax when touched, and take food from human hands. If an animal is observed to do these behaviors, then we label it friendly.

Among professionals, there is a tendency to describe behavior in terms of diagnostic labels based on hypothetical, psychological constructs. Ostensibly, these constructs tell us what an animal has or lacks, such as anxiety, dominance, or motivation.

A construct is a concept that is inferred from commonalities among observed phenomena and used to explain those phenomena. However, constructs are abstractions by definition, and abstractions cannot cause behavior. Although constructs can have a place in theory building, and conveniently summarize behaviors with a single word, they lack the specific information we need for an objective understanding of behavior.

Animals like this Amazon parrot are empowered by exercising choice to solve problems and interact with novel items in their environments.

See teaching opportunities instead of punishment opportunities: misbehavior is a lack of information, motivation (weak reinforcers), or practice. An important goal (if not the most important goal) is for animals to respond to our requests because they possess the skills and the motivation to do so, not because they have to. Animals learn something with each and every interaction they have with humans, and what they learn influences how they behave in the future.

There is no off switch where learning is concerned. Therefore, it is most productive to think of every interaction with an animal as a teaching opportunity.

Instead of punishing problem behaviors, identify what the animal should be doing instead and teach that behavior.

There is a saying among behavior analysts that the rat is never wrong. This expression is meant to remind us that the responsibility for a learner’s behavior rests largely with the learner’s teachers. As Kay Laurence eloquently wrote, “[It] is not about teaching impressive behaviors; it is about impressive teaching of behaviors.”

It is the nature of all animals to use behavior to achieve valued outcomes. Given the power to choose, animals can be taught to behave successfully by shaping small approximations that lead to the end goal. Reinforcement is the crown jewel of teaching. To use it most effectively, positive reinforcers should be certain, swift and strong. A high rate of repetition and planned generalization builds fluent behaviors and a strong human-animal bond.

To understand behavior, our main focus should be on observable behavior, not vague labels or intangible constructs.

Be aware that information is exchanged in every interaction we have with animals; thus, every interaction is a teaching opportunity. Next time you walk up to an animal, consider carefully what you want it to learn about you.

The principles represented by the letters P-A-R-R-O-T are fundamental to facilitating behavioral health and building trusting, longterm relationships with the animals in our care. 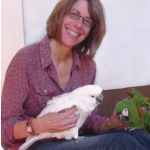 Susan G. Friedman, Ph.D., is a psychology professor at Utah State University. Over the last decade, she has helped pioneer efforts to apply to animals the scientifically sound teaching technology and ethical standard of Applied Behavior Analysis. Susan teaches two on-line courses, one for veterinarians and other animal professionals, and another for pet owners; and she presents cross-species seminars around the world. Her articles appear on the Internet in 10 languages.

This article was originally published August 2010 in PsittaScene magazine.